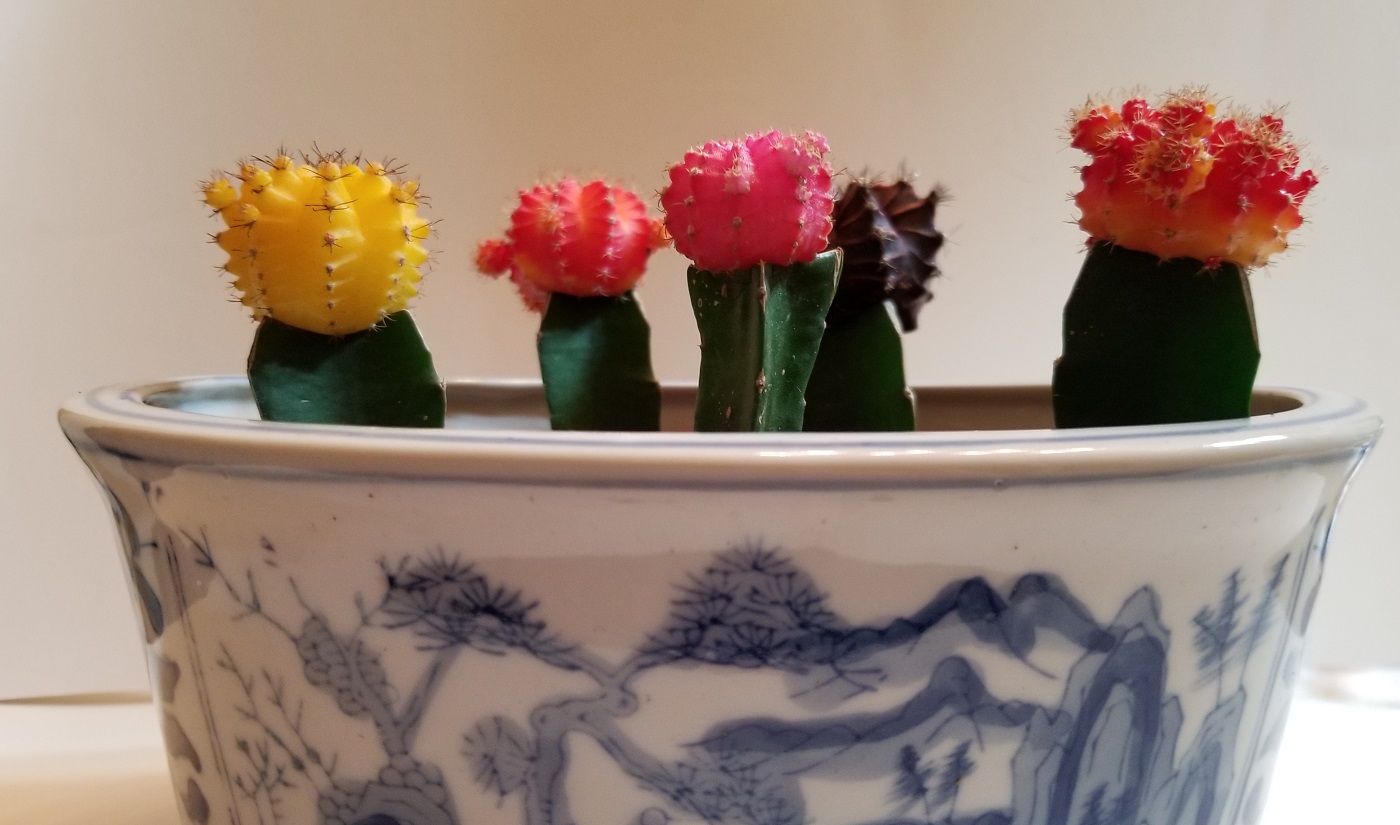 You've probably seen the neon colored moon cactus. They are frequently sold in the plant sections of big box retailers - those funny-looking cacti that look like a thick green stem with a neon ball growing on top.

These cacti can be bright red, pink, orange, purple, yellow, or even white.

There are also bicolor varieties available, like the red and yellow-orange one to the right in my pot shown here.

What is a Moon Cactus?

Also called Neon Cactus or Grafted Cactus, this is actually not a single plant.  It is a colored albino cactus (the top "ball", which is actually the moon cactus) stuck on top of a base which is another cactus, usually a Hylocerus undatus.

Why is This a Grafted Cactus?

You might wonder why this is sold as a grafted cactus.  Why not sell just the colorful moon cactus by itself?

Well, this brightly-colored cultivar is actually an albino mutant, and it cannot survive growing by itself. The albino coloration allows the bright neon shades to show through (they are not mixed with green), but it also means that the plant has no chlorophyll so it is unable to photosynthesize.  It can only get the nutrients it needs to live and grow from the host cactus, which is the green stem-looking base.

Moon Cactus in the Wild 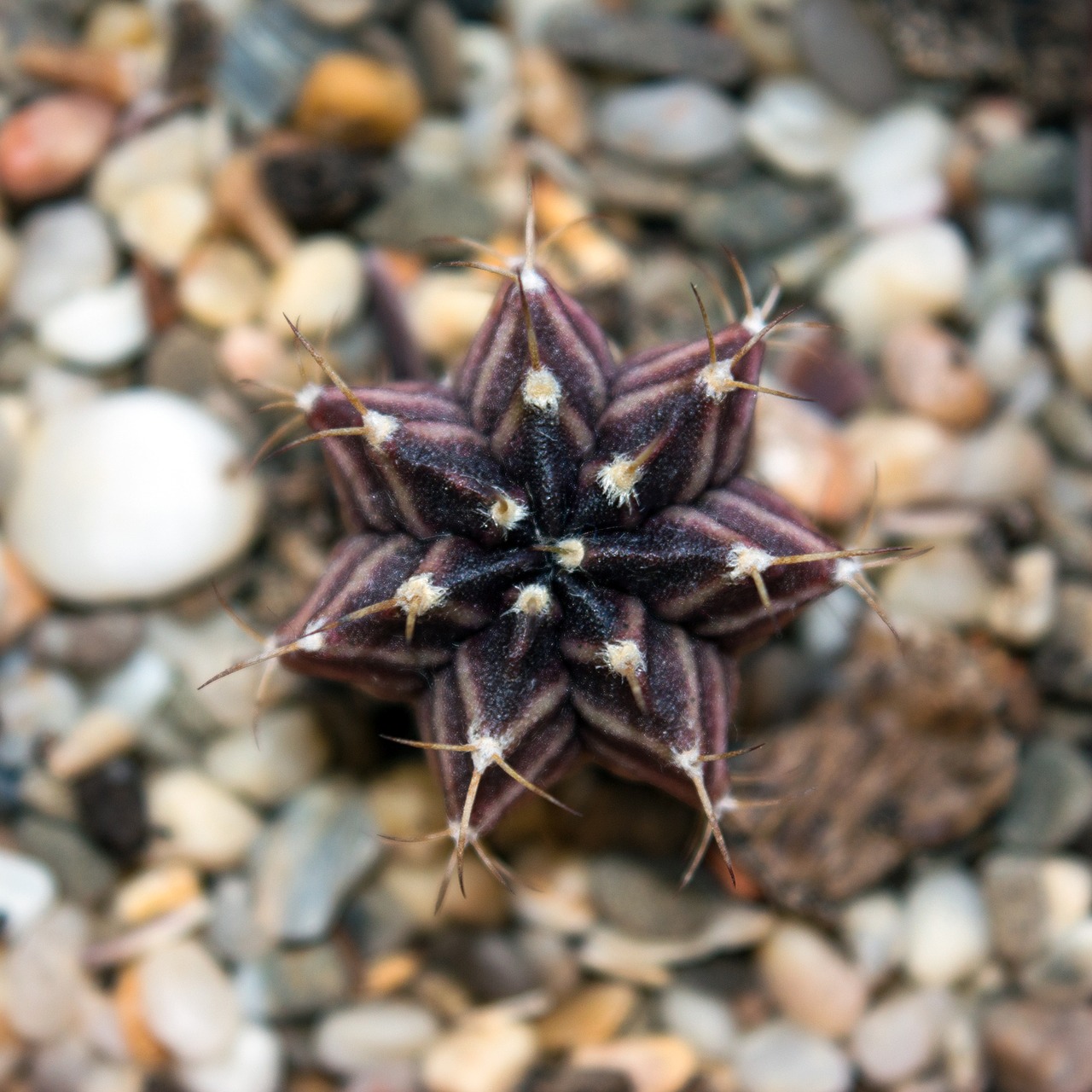 Moon cacti, or Gymnocalycium Mihanovichii, are native to desert areas of South America, including Argentina, Bolivia, Brazil and Paraguay.  There are more than 80 species of Gymnocalycium.

In their native habitat, Gymnocalycium cacti live in the shade of other vegetation, so they prefer bright indirect light rather than direct sun.

Wild Gymnocalycium Mihanovichii are small, spherical cacti which are gray-green to reddish-brown, reaching sizes of only a few inches in height and width.

Origins of this Neon Cactus

The familiar brightly-colored moon cactus houseplant looks so different from their wild relatives, you might wonder how it came to be. 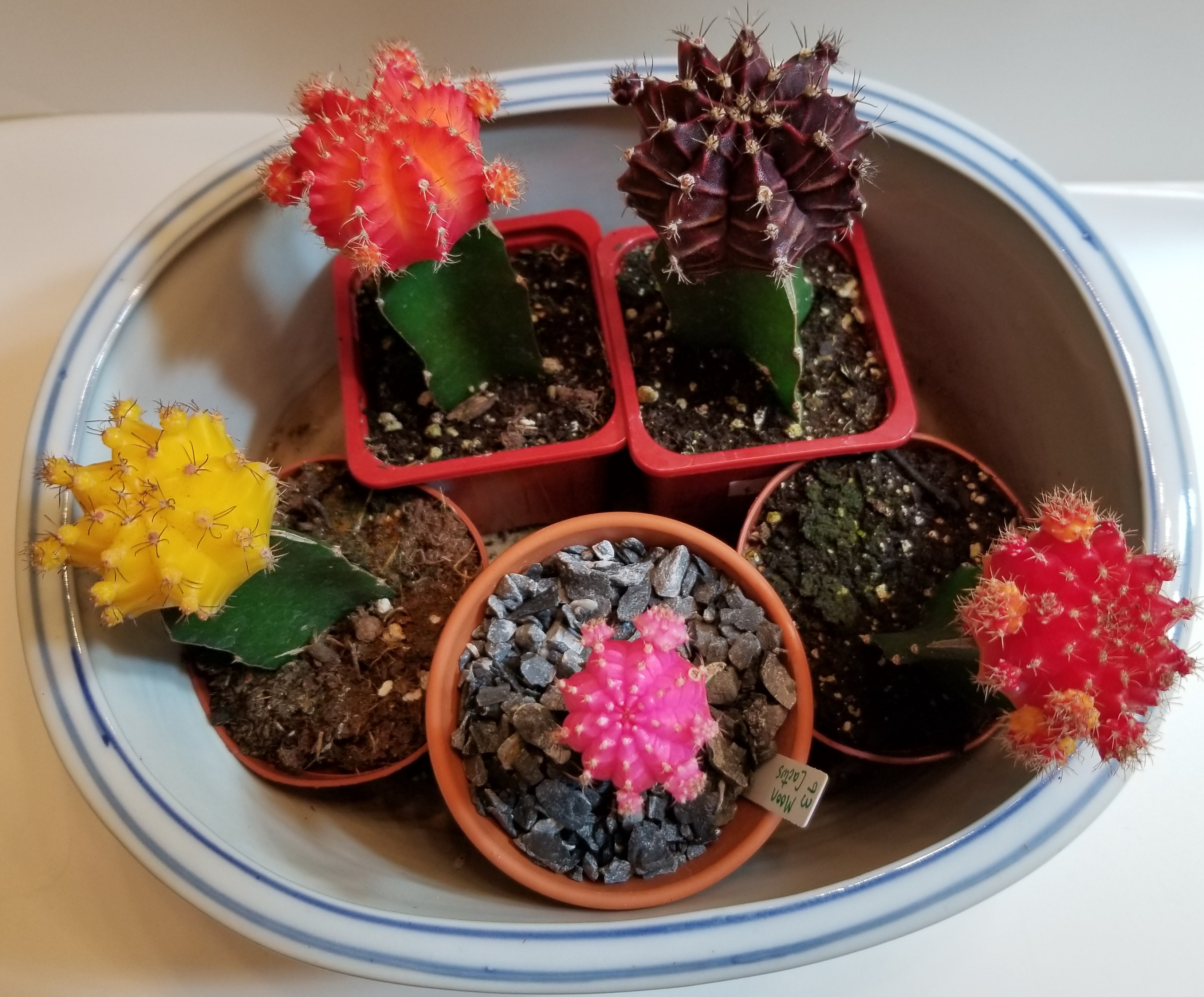 It actually all started in Japan during World War II. A gardener called Eiji Watanabe imported seeds of the wild form to grow commercially. A couple of these grew as mutants that were somewhat reddish colored. He grafted these, and continued to propagate the babies, selecting the most colorful ones each time, eventually leading to the very brightly colored versions that we see today that are now unable to survive without their graft host.

You can also find plants more similar to the darker mutants that Watanabe started with, which are colored but still have enough chlorophyll to grow by themselves.  These are often referred to as "Hibotan Nishiki". You can read more about the dark purple variety below.

Today, about fifteen million of these grafted cacti are sold internationally, with the vast majority of them being produced in South Korea.

Moon cactus are prevalent in big box retailers that sell plants, or of course you can also find them in your local nursery cactus section.

A healthy plant should have a full round "ball" on top (this is the actual moon cactus) which may have various "babies" attached to it.  The green "stem" is actually the host cactus that the Moon cactus is grafted to (called the "stock").  Make sure this is also healthy: the stock cactus should be all green and firm, with no brown or soft parts that might indicate over-watering or rot. Ideally you also want to choose a cactus that is growing straight up, not leaning to one side or another. Finally, check over the graft seam to ensure there are no splits or diseased areas.

If you live in a year-round warm climate you can plant your moon cactus outdoors - they are hardy to 30F (zone 10 in the US). 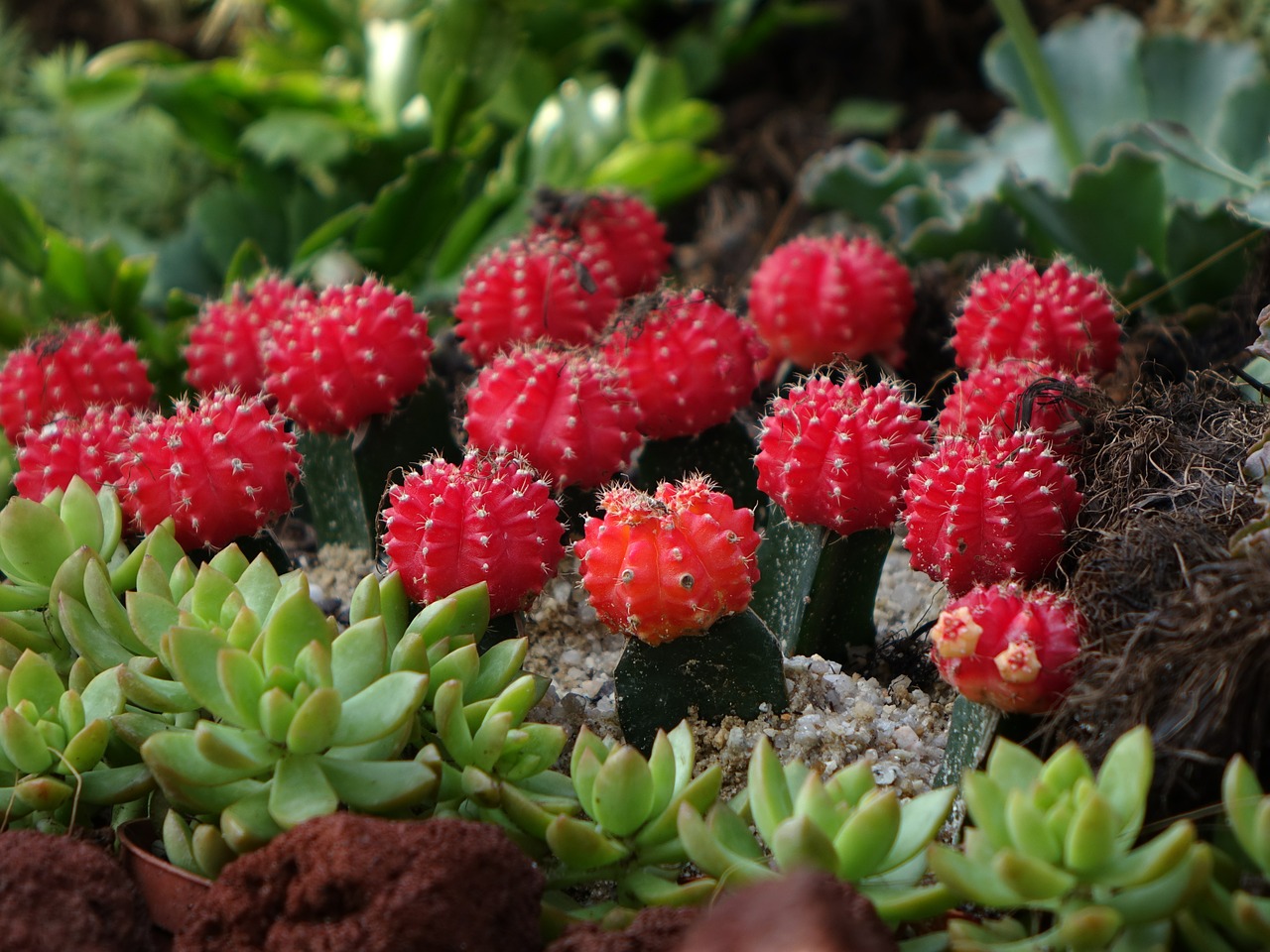 More frequently, they are used as houseplants growing indoors, either in individual pots or as part of a cactus garden container.

Moon cacti are very easy to take care of indoors. They prefer bright indirect light or partial sunlight and can thrive with very little water. Avoid placing them in direct afternoon sun because their color might get bleached and fade. The green base plant has been specifically chosen to be very adaptable to typical indoor conditions.  This is usually a "Hylocerus undatus", which is a triangular tropical cactus that can survive in very dry or even quite moist conditions.

Most moon cacti don't survive more than two or three years, because the two grafted plants may grow at different rates and the graft splits.  Once that happens, the moon cactus will die unless it is regrafted onto a new rootstock. 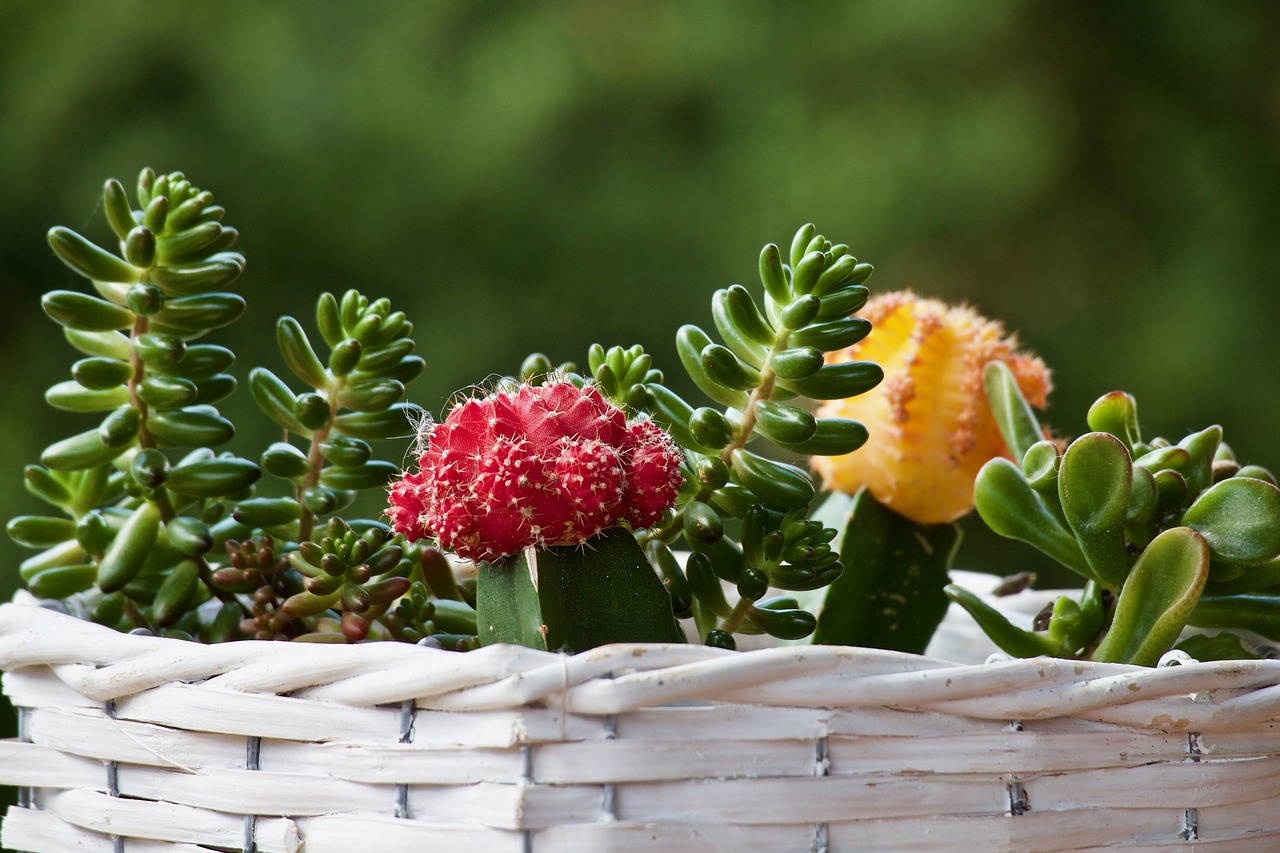 The moon cactus base is not particularly attractive, so it can be nice to pair them with a lower-growing or spreading succulent with similar light and water needs.

Really any succulent will do, such as the sedum and jade in this cute combination basket with a red and a yellow moon cactus.

Kalanchoe can be an excellent choice because they also prefer bright indirect light. A moon cactus can be potted in the same container with Kalanchoe humilis (Tiger Kalanchoe) or Kalanchoe tomentosa (Bear's Paws), for example, for a very pretty community planter.

Usually, cacti or succulents are not good long-term inhabitants of terrariums. This is because they need more airflow and less humidity than provided by a typical terrarium environment.

But I make an exception for moon cacti. Why?

A moon cactus is very hardy and the grafted plant doesn't often live longer than a couple of years anyway.  So you can certainly add a moon cactus for a splash of color in a dry terrarium setup.  It will survive and continue to add that pop of color, even if it doesn't thrive. And if you need to replace it, that's easy to do since the plant can be found in most big box stores and nurseries. 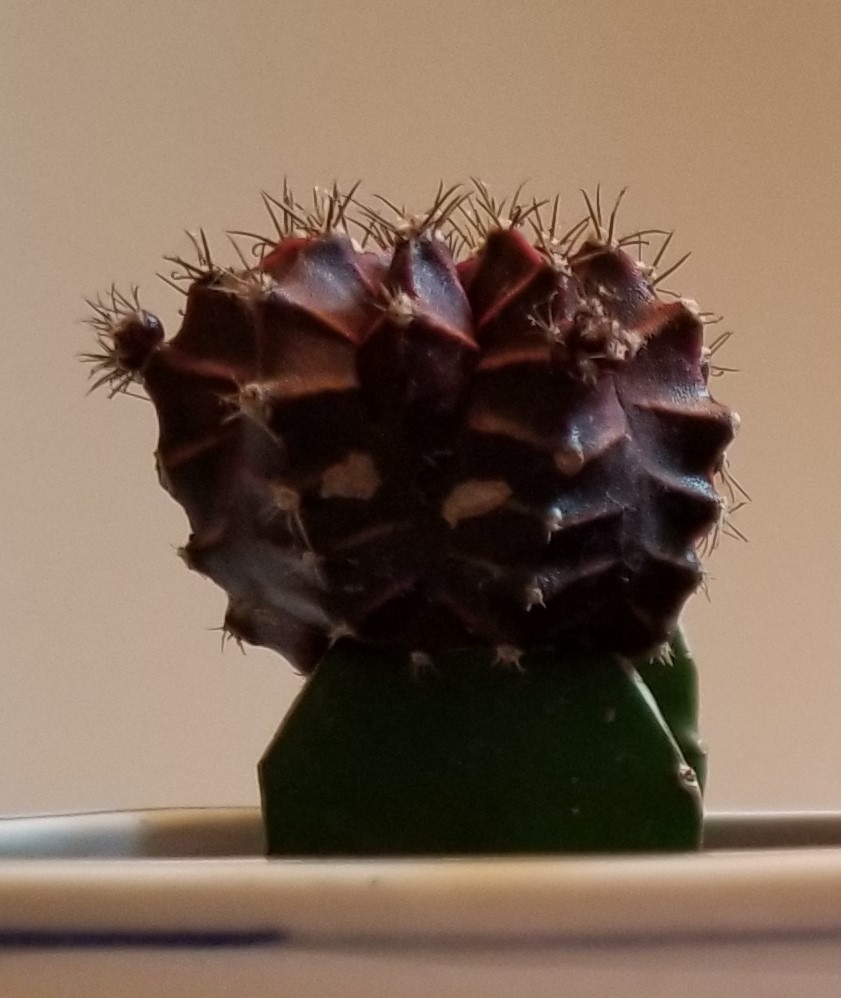 The only color variant that is able to grow by itself is the dark purple or dark burgundy one, because it does have some chlorophyll.  I usually only see them in the stores as a grafted cactus, but there's no reason one couldn't remove the top part (and/or the babies) and grow them separately in a pot by themselves.  You are also more likely to get flowers from the dark colored varieties.

I haven't tried this myself yet, although I do own a dark purple grafted moon cactus which is throwing out some babies.  Once they get a little larger I plan to plant them up separately to see if they will survive.  This blog discussion shows someone who did this, and her plant was still thriving after four years of growing on its own.

Wild moon cacti will produce pink flowers in the spring - usually in April or May. The bright neon-colored grafted moon cacti don't always bloom, although I have seen pink flowers on the darker burgundy and purple varieties. Bloom color can range from very pale pink to bright red, and on indoor plants the blooms can appear any time of the year.

Sometimes you will find the moon cactus producing buds, but they may fall off before the bloom fully opens. This is usually due to either too much or too little water, or a recent change in environment, such as sun or temperature changes.

How long do moon cactus live?

Because moon cacti are grafted, they don't live very long. You can expect your moon cactus to live for a couple of years, maybe more, but at some point the two grafted plants will start to separate or split, and then the moon cactus will die unless grafted onto a new base.

How often do you water a moon cactus?

Moon cacti are native to arid desert regions, so they don't need to be watered very often. It is best to water them thoroughly, and then let them dry out completely and wait a little longer before watering again. This reproduces the infrequent rainstorms of their native habitat. As houseplants, you probably don't need to water them more than once or twice a month, and even less in the wintertime. Overwatering is the most common reason that moon cactus houseplants die.

What do I do with moon cactus pups?

You might notice that your moon cactus starts to produce little bumps, or colored balls on the side that look like mini versions of the plant.  These are not blooms, but babies or pups. 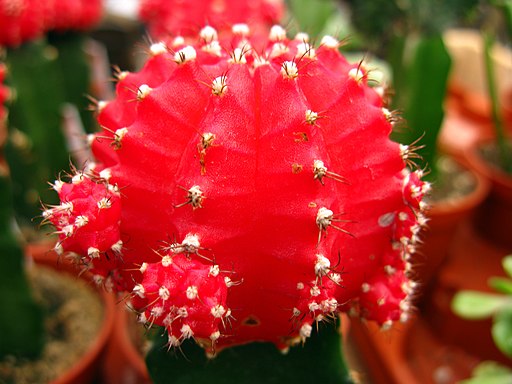 You can propagate the moon cactus pups but remember that unless they have some green or area of darker color on them, they will not be able to survive without being grafted to a host cactus.  You can also leave them where they are, or remove them if you prefer the look of your Moon cactus without them.

If you want to try grafting them, typical stock cactus are Hylocerus undatus or Myrtillocactus geometrizans. Basically, you just take a slice off the top of the stock cactus, slice a little off the bottom of the Moon cactus baby, place them together with the sliced areas touching and tie them together with string for about a week or so until they bind.

If your moon cactus pup is a dark-colored variety (sometimes dark purple, burgundy or almost brown looking), or if it has any green on it, then it might be able to survive by itself without a graft host.  You can pull the pup off and set it on top of cactus soil to see if it will grow roots.

Why is my moon cactus growing arms?

Sometimes the bottom stock cactus will branch, growing side shoots that look like arms. If you like them, there's no reason not to leave them, although you may find they start to grow much faster than the rest of the plant and might soon overtake it.

You can also trim the side growth with sharp, clean pruning shears or scissors. The cut will heal over just fine, and if you want you can place the cutting in a separate pot where it will grow roots and continue to thrive as a whole new plant (without the moon cactus on top, of course).

How do you keep a moon cactus alive?

Not much care is needed to keep a moon cactus alive.  Most moon cacti are killed by overwatering, or when they split from their root stock.  To keep your cactus alive, just make sure to provide it some bright indirect light, and water it every few weeks after the soil is completely dry.

Why is my moon cactus dying?

A grafted moon cactus usually only lives for a couple of years. This is because it relies on the graft with its host cactus (the green "stem") and if that starts to split or separate then the moon cactus will die.

Moon cacti also frequently die from overwatering, which you can tell if the green base is turning brown or mushy.

Why is the moon cactus top turning brown?

Usually a cactus turning brown is from overwatering (especially if the brown parts feel soft or mushy to the touch), or sometimes from underwatering if the plant has been left for several months without water.

If the top of your moon cactus is turning brown, then that could be because of too much direct sunlight or a grow light that is too close, which burned the plant.  Moon cacti need only indirect light, and they may burn or fade in direct sun. If this is the case, just move your plant to an area with less sunlight. The brown top will not go away, but hopefully the remaining healthy tissue will survive and continue to grow.

A Colorful Addition to a Cactus Garden 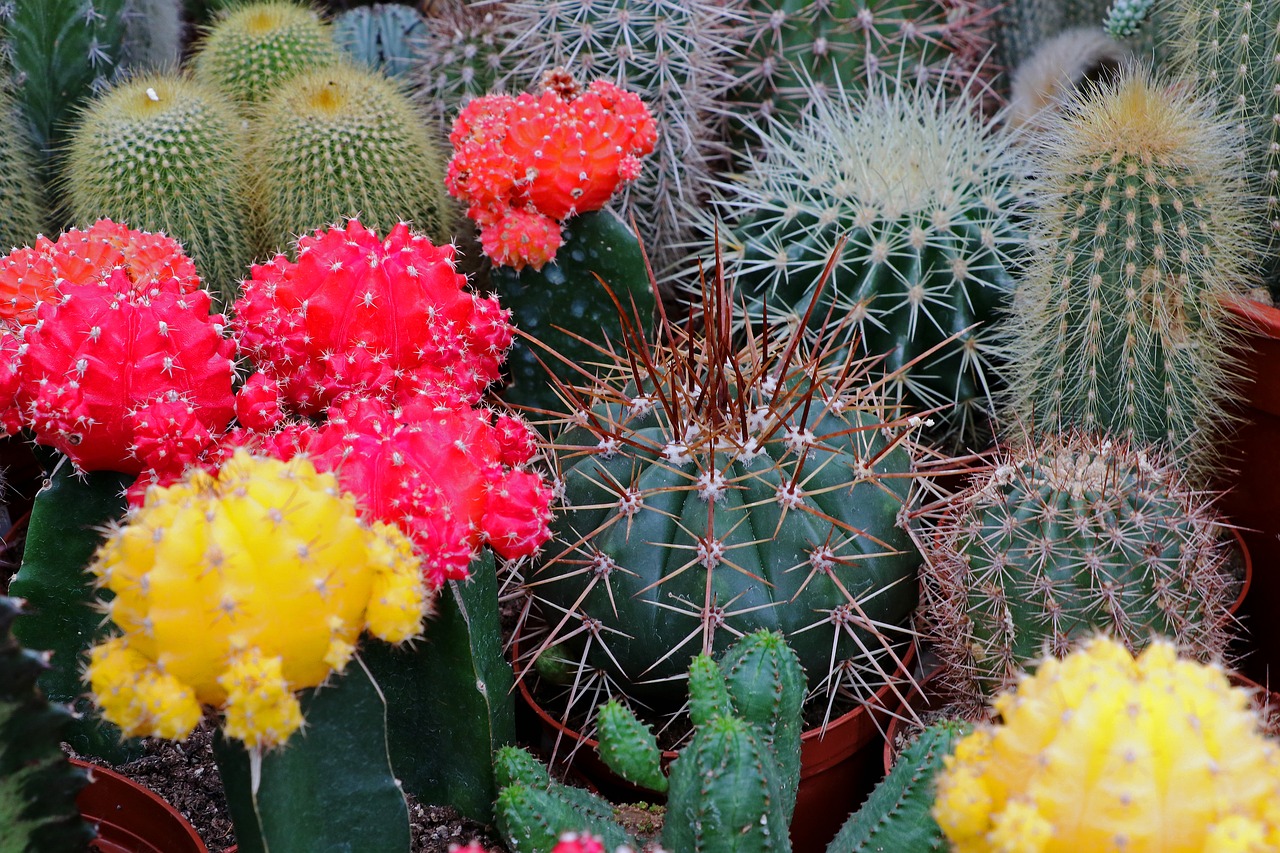 Brightly colored moon cactus can make a dramatic addition to a cactus garden.

Read this article for more tips about creating and caring for a cactus garden planter.

Next, learn more about other cacti like the lovely blooming Holiday Cactus.

Fill in the form below to sign up for our monthly email newsletter, Garden In Pots: