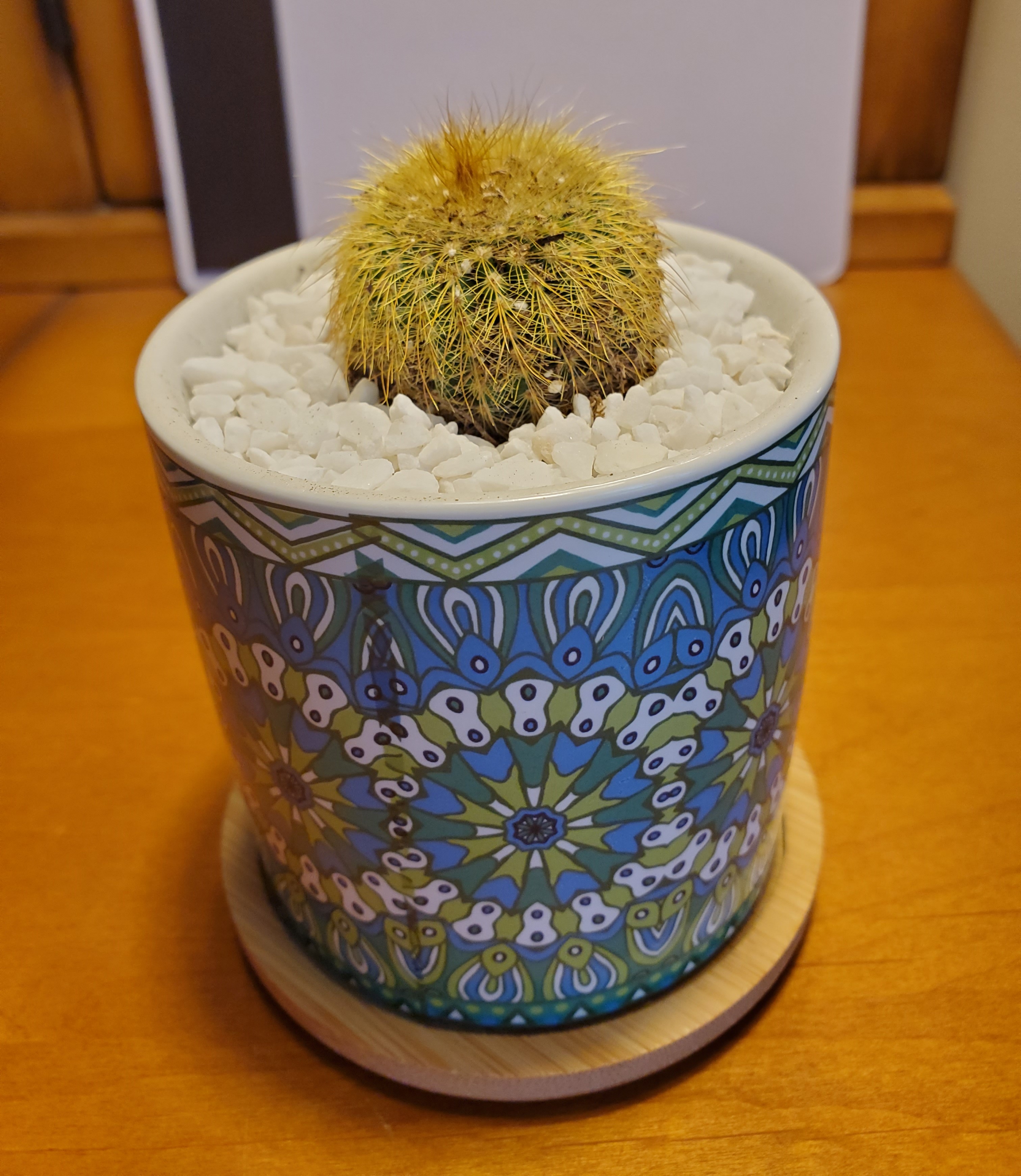 The Golden Ball cactus makes a very cute houseplant for the succulent enthusiast. As its name implies, small plants look like a fluffy gold globe, although the cactus will grow taller as it ages.

Golden Ball cacti have long, soft yellow spines that look like golden hair. These spines give it almost a gold glowing aura, and they are quite soft so Golden Ball cacti are a little easier to handle than some other spinier cacti.

This cactus is also called Yellow Tower, because as it gets older the cactus grows in tall columns that look very different from the young plant. Of course, cacti grow very slowly so it will take many years to go from the young plant seen here, to the older cluster below. And if kept inside in a small pot, your cactus will never grow very large.

Water: Average during the growing period. Barely, if any, during winter.

The golden ball cactus is native to Brazil and Paraguay. They grow in the Rio Grande do Sul in southern Brazil at elevations between 1,000 to 4,000 feet. They are most common in hilly grasslands in the shade of larger plants and can withstand a wide range of temperatures.

They have lots of soft, golden yellow spines. Young cacti look like golden balls (hence their name), but older specimens in their natural setting can grow into clusters of tall columns up to 3 feet in height (hence their other common name, yellow tower cactus).

Once the cactus is several inches tall it may flower with bright yellow blooms in spring or summer at the top of the plant.  The flowers can be 2 inches across.

It was named after cactus collector Wilhelm Lenninghaus who left his German homeland in the 1880’s for Brazil, while working for the German grower Haage.

How do you take care of a golden ball cactus?

Golden ball cacti are quite easy to take care of, so long as you remember not to give them too much water, and make sure they receive some sunlight (or a grow light).  They actually don't like to be in direct sunlight all day, unlike some other cacti.  They prefer partial sunlight, with a bit of filtered shade during the hottest part of the day.

Make sure your golden ball cactus is planted in porous soil which has good drainage, in a pot with a drain hole so they are not sitting in water.  The soil should dry out fairly quickly after watering.

The golden ball cactus in Mandala pot shown above is available for sale in our Etsy store here.

Next, learn about other cacti, like the strange-looking Moon Cactus here.

Fill in the form below to sign up for our monthly email newsletter, Garden In Pots: